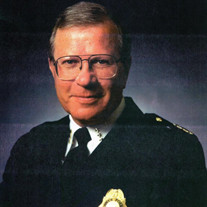 David Lloyd Michaud, Retired Denver Police Chief, appointed by Mayor Wellington Webb, passed away peacefully with his wife, Lois by his side on Saturday, December 26, 2020. David joined the Denver Police Department in 1967 after proudly serving in the US Marine Corps. His service in the Marines instilled in him a set of values, honor, service and leadership that were part of him throughout his life. After his retirement, he also served as Chairman of the Colorado Parole Board when called upon by Governor Bill Ritter. Due to COVID-19 restrictions, David’s funeral was limited to five people. He was laid to rest December 31, 2020. His most heartfelt request was for his final resting place to be at Ft. Logan National Cemetery with the Marines. His service was attended by his wife Lois, daughter Denise, son Michael, grandson Jordan and at their request Denver Police Chief Paul Pazen representing the men and women of the Denver Police Department that David was proud to be part of for his entire career. Special thanks to the Traffic Operations Motorcycle Unit of the Denver Police Department for their escort upon entering the Denver city limits to the cemetery. On Tuesday, October 19, 2021 David’s birthday the family working with the Denver Police Museum and Chief Pazen is planning a tribute to David including the unveiling of his headstone. The expectation is the virus restrictions will be lifted and the men and women of the Denver Police Department, family and friends can join together to remember the man by sharing stories of their service with him and honor his memory that they were deprived of doing because of the virus. His wife wishes to extend a thank you to the citizens of Denver for supporting David throughout his career which allowed him to do what he loved to serve and protect them to the best of his ability with his fellow officers. Details of the Tribute will be published in the months ahead. The family wishes to extend its most sincere thanks to the men and women at the Roselawn Funeral Home of Pueblo who assisted in making the funeral arrangements with Theresa Johnson at Ft Logan for their compassion, thoughtfulness, professionalism, kindness and care. Their help made the most difficult experience comfortable. Anyone interested in making a donation in the memory of David please do so to the Denver Police Museum. A special page has been set up to facilitate the donation. Semper Fi Marine. Online condolences can be made at roselawnpueblo.org

The family of David Lloyd Michaud created this Life Tributes page to make it easy to share your memories.

Send flowers to the Michaud family.