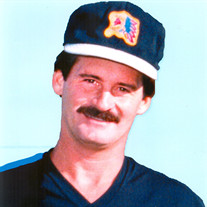 David Gene “Mass” Masser, was born March 12, 1953 and departed this life unexpectedly due to a heart attack, August 2, 2014. Preceded in death by his father, Bob Masser. Dave is survived by his loving mother, Joanne Masser; daughter, Megan Masser- Pope (Darius Pope); and grandson, D.J. Pope; sisters, Donna Masser, Debra Grasmick (David), Jody Farris (Michael) and Bobbi Jo Grieselding (Mike). Nieces and nephews, Justin Rider (Heather), Will Grasmick (Mayra), Ty Grasmick (Kristen), Jordan Farris, Gunnar Farris, Jace Grieselding, Taylor Grieselding; great nieces and nephews, Mikyla Grasmick, Liam Rider, and Ellia Grasmick; blood brother, Mike Escobado; and many extended family and friends. Dave was one of Pueblo’s most elite athletes and his faith in God was second to none. He was drafted and played for the Kansas City Royals out of high school in 1971. He played for the Royals organization one season and returned to receive a full-ride scholarship to play basketball at SCSC. Dave also went on to the ISC world tourney six times and tied the record for the most (2) home runs in one game, MVP in 4 state championship wins with Aztec softball club, MVP of travel league for Aztec, the only team from Pueblo, in 1981. He was the only player in travel league history to win triple crown in 1981 as well as numerous all tourney and MVP awards. The family also wishes to give a special thank you to the Escobado and Hasenack families for their loving support and generosity. Viewing will be 6:00pm to 7:00pm, Thursday Aug 7, 2014 at Roselawn Funeral Home Chapel. Funeral Service will be 11:00am, Friday, Aug 8, 2014 at Runyon Field (Hobbs Field). Interment at Roselawn Cemetery. Reception to follow at St. Joseph Church at 4:00 pm. In lieu of flowers, donations can be made to his mother, Joanne, through Roselawn Funeral Home.

David Gene &#8220;Mass&#8221; Masser, was born March 12, 1953 and departed this life unexpectedly due to a heart attack, August 2, 2014. Preceded in death by his father, Bob Masser. Dave is survived by his loving mother, Joanne Masser; daughter,... View Obituary & Service Information

The family of David Gene "Mass" Masser created this Life Tributes page to make it easy to share your memories.

Send flowers to the Masser family.