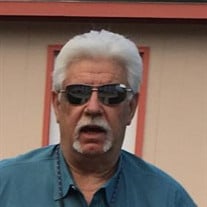 Darrel “Coach” Vaughan, age 68, passed away July 5, 2016 unexpectedly. He was born April 30, 1948 to Rex and Evelyn Vaughan. He is survived by his wife, Crystal of 37 years; children, Rob Vaughan and Amy Vaughan; grandchildren, Kayla, Tyler, Logan, Cylie, and Khloe; great-grandson Karter. Also survived by his mother, Evelyn; brothers, Everett and Rodney; sisters, Sharon and Christine; several other family members including nieces and nephews; and his special pet “Cissy”. He was preceded in death by his father, Rex and grandson, Dillon. Darrel served with the US Marine Corp in Vietnam and was discharged honorably as a Corporal. He received his Masters from the University of Northern Colorado in Education. He taught and was Director of Education at El Pueblo for the Boys & Girls Ranch for 18 years, Principal of YAFA, Pikes Peak BOCES and Hanover School District. He retired 2016 from GOAL Academy. Darrel was known in the sports community as an outstanding athlete and Coach. He was a key player in the 1965 Central State Championship season and a player for the AFL Houston Oilers until he went to the Worlds Football League. He was the defensive coordinator for Centennial Bulldogs in the Class 3A football state title and the Class 5A state title in 1992. He was loved by all coaching friends and players. A Memorial Service will be held at 9:00am, Tuesday, July 12, 2016 at Centennial High School Auditorium. A celebration will follow memorial service at Gray’s Coors Tavern. Online condolences can be made at roselawnpueblo.com

The family of Darrel Edward Vaughan created this Life Tributes page to make it easy to share your memories.

Send flowers to the Vaughan family.