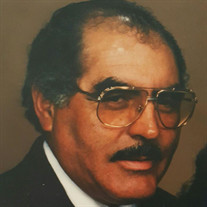 EULOGY: My heart is broken as I stand before you this morning. There are days we look forward to in life with great joy, such as birthdays, graduations, holidays, etc. And, there are days that we dread, so much so, that we not dare speak... View Obituary & Service Information

The family of Daniel R. Vasquez created this Life Tributes page to make it easy to share your memories.

EULOGY:
My heart is broken as I stand before you this morning....

Send flowers to the Vasquez family.