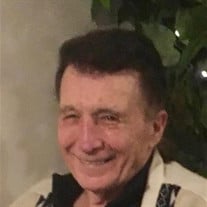 Charles “Chuck” Carducci of Pueblo, formerly of Amarillo, TX and Chicago Heights, Ill, went to be with the Lord, April 15, 2019. He passed of natural causes after a long illness. Preceded in death by his wife, Rosemary; parents, Frances and Clemente Carducci; and brothers, Albert and Clement. Survived by his daughter, Donna (David) Macurdy, of Reston, Virginia; sons, Timothy (Kay) Carducci, of Pueblo, CO, and David Carducci, of Fort Myers, Florida; six grandchildren; ten great grandchildren; and one great-great granddaughter. Chuck was born in Pueblo on January 26, 1925. The majority of his youth was spent in Chicago Heights, Illinois. He enlisted in the Marine Corps in 1943 and served honorably with the 4th division primarily in the Marshall Islands during WW II. Chuck returned to Chicago Heights after the war and lived there until 1958. He and his family moved back to his beloved Pueblo that same year. As Sales Manager of the Pepsi Cola Bottling Company he led the team that supplied Pepsi-Cola products to Southern Colorado for the next fifteen years. During that time Chuck and the rest of the Pepsi Team received national acclaim for salesmanship and programs that gave back to the community. Chuck moved to Amarillo Texas in 1973. He was the general manager and owner of the Pepsi Cola franchise in Amarillo. He remained in Amarillo until 2012. Chuck returned to his Pueblo roots that same year, remaining in Pueblo until his passing. Charles Carducci was greatly loved and admired by many. He had a wonderful sense of humor. He loved to share his stories with friends and strangers alike. He always made everyone feel welcome and his sincere humility drew people to him. Chuck’s faith carried him bravely through his final days. “Well done good and faithful servant” -Welcome to Paradise dear Charles! “God is my Salvation, I will trust and not be afraid”. Donations can be made to Sangre de Cristo Hospice, 1207 Pueblo Blvd Way, Pueblo, CO, 81005, Triple Acres Horse Rescue-Boone, CO, 51110 Olson Road, Boone, CO, 81025, or www.3ahr,org or Roselawn Foundation, 1706 Roselawn Rd, Pueblo, CO, 81006. A Celebration of Life will start at 6:00pm, Tuesday, April 23, 2019 followed by Recitation of the Rosary at 7:00pm at Roselawn Funeral Home Chapel. Funeral Mass will be 10:00am, Wednesday, April 24, 2019 at St. Joseph Church. Entombment to follow at Roselawn Cemetery. Online condolences can be made at roselawnpueblo.org.

Charles &#8220;Chuck&#8221; Carducci of Pueblo, formerly of Amarillo, TX and Chicago Heights, Ill, went to be with the Lord, April 15, 2019. He passed of natural causes after a long illness. Preceded in death by his wife, Rosemary; parents,... View Obituary & Service Information

The family of Charles "Chuck" Carducci created this Life Tributes page to make it easy to share your memories.

Send flowers to the Carducci family.