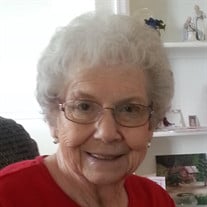 Betty Arlene Gridley, 85, passed peacefully into the arms of the Lord on October 30, 2019 in Pueblo, Colorado. She was born December 22, 1933 to Howard and Karein Ball in Atlanta, Idaho. Betty spent most of her younger years in the mountains. Her family moved to Mountain Home, Idaho in 1943, where she attended high school. After graduation, Betty was accepted into the nursing school at Washington State University where she was part of the third class that completed the program. She returned to Mountain Home and worked as an RN at the local hospital while she helped care for her ailing father who had pulmonary sclerosis from working the gold mines in Rocky Bar. While in Mountain Home, she married Dr.Samuel Gridley and they moved to Yakima, Washington in 1966. Betty was a stay-at-home mom until 1976 when she went to work for Providence hospital (formally St. Elizabeth) as a Post Op / Recovery nurse. She retired after over 30 years of nursing and received a “Lifetime Achievement in Nursing Award” from Washington State Nurses Association. Betty continued to help at nursing homes and retirement centers. Prior to her 81st birthday, Betty moved to Pueblo, Colorado where she remained for five years before leaving this life. Those who knew Betty would testify to her generosity, unconditional love, humor, and astute observation. Betty was always one to notice a change in one’s hair style, new shirt, or a new scab or scar. She believed strongly in prayer but even stronger in action and would drop what she was doing to help someone in need. She enjoyed attending West Side Baptist church, reading her bible, playing cards, listening to Charles Swindoll tapes and baking delicious pies. Additionally, Betty enjoyed learning to fly a plane in the Spring of 1974. Most of all, Betty loved spending time with her friends and grandchildren and being in the mountains, especially up the secluded Wide West Gulch in Idaho where she owned property along with other family members. Betty was preceded in death by her parents, her brother Howard, and ex-husband Dr. Samuel Gridley. She is survived by her sister, Louise Ainsworth; children, Tara (Steve) Emerick, and Perry (Angie) Gridley; grandchildren, Shawn (Christine) Emerick, Tyler Emerick, Hannah Gridley, and Abigail Gridley; her nephews, Ken (Kris) Ainsworth and Howard Ball; nieces, Sheryl (Gary) Allen, Betty (Rick) Hendrickson, Linda (Fred) Keezer, Corrine (Ed) Breier, and Sherry Marie Kimmel (Ball), and numerous great nieces and nephews.The family would like to thank all the staff at the following Adult Living institutions who took such great care of Betty during her last couple of years: Chateau at Sharmar, Legacy Commons, and Rock Canyon Respiratory and Rehab Center; and to Sangre de Cristo Hospice for the care they provided in her final days. Please share any stories or write your condolences online at roselawnpueblo.org. There will be no services as the family will have a private gathering.

Betty Arlene Gridley, 85, passed peacefully into the arms of the Lord on October 30, 2019 in Pueblo, Colorado. She was born December 22, 1933 to Howard and Karein Ball in Atlanta, Idaho. Betty spent most of her younger years in the mountains.... View Obituary & Service Information

The family of Betty Arlene Gridley created this Life Tributes page to make it easy to share your memories.

Betty Arlene Gridley, 85, passed peacefully into the arms of...

Send flowers to the Gridley family.