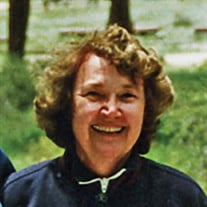 Betty Hummell Bullen, 94, originally of New Jersey and longtime Pueblo resident, passed away on November 20, 2020 in Pueblo. Her survivors will always cherish the memory of her loving and joyful spirit, kindness, and thoughtful and inspiring ways. Born in Philadelphia to Elmer A. and Bertha E. Hummell, Betty was raised in Mays Landing, NJ. A superior student, she graduated as valedictorian of her Atlantic City High School class. Meeting husband Joe Bullen at Swarthmore College, they married in 1947, moved to Pueblo in 1948, and this marriage lasted until her death over 73 years later. They raised children Scott, now of Hudson, Massachusetts; Jeanne, who predeceased her in 2014; and Sharilyn Coxen of Mount Vernon, Oregon. Grandchildren by daughter Jeanne are Nikki Gonzales and Jason Shiell; and by daughter Sharilyn are Cassie Longest, and Brody and Kelly Coxen. Betty was quite active in many Pueblo civic and community activities. She served many years as director of Pueblo Planning and Zoning commission, and on the Zoning Board of Appeals. She served United Way, Junior League (Service League), Pueblo Friends of the Library (as treasurer), Blood Bank, Broadway Theater League, and the Raptor and Nature Center. She became President of the Board of Directors of Pueblo Planned Parenthood, and board member of Rocky Mountain Planned Parenthood in Denver. As a lover of the theatrical arts, in 1956, after rehearsing for months, Betty (and Joe and many other Puebloans) entertained Memorial Hall audiences in a Broadway-directed community extravaganza of humorous skits, and musical and dance performances. She was a member of Pueblo’s Wednesday Morning Club for five decades; her book reviews were always enthusiastically received by club members. She showcased her theatrical talents at the club’s annual May Fete celebrations where she would really “ham it up.” She and the family tremendously enjoyed several of Cripple Creek’s Imperial Hotel melodrama performances. Betty loved outdoor and sporting activities. She deeply appreciated the Colorado mountains, especially at the family summer home at Huckleberry Hills Ranch, three miles northwest of Rye. The family there walked frequently and rode horseback. She was an avid skier and tennis player, especially with neighborhood friend Gussy Peaker. The family enjoyed weekly ice-skating trips to the Broadmoor Ice Arena, and she took the kids for numerous summer visits to the swimming pool at the Pueblo Country Club. With her proverbial green thumb she tended wonderful flower and vegetable gardens. Always a devout Christian, Betty participated in church activities, and studied and taught Christian and spiritual principles. As a teenager she presided over her Presbyterian church youth Westminster Fellowship for three years, and also the Westminster Fellowship of the state Synod. She served as the New Jersey Synod’s delegate to national conventions, traveling by train to them in faraway places including Oklahoma and Wisconsin. Betty and Joe taught adult Sunday school at the Presbyterian Church of Pueblo. She studied under pastor Max Ballard of the Divine Science Church, and taught a Divine Science class in Colorado Springs. She and husband Joe were deeply involved in the original research and compilation of Morey Bernstein’s best-selling book, The Search For Bridey Murphy, from which developed in her mind an abiding faith in reincarnation. Betty dedicated much of her life to raising her children well. She treasured them and embraced every moment with them. She worked hard at all the many things that mothers do, including the hard work of setting boundaries. Her encouragement for them included sayings learned from her parents such as “When you do your best, even the angels can’t do better.” Included in the family unit were various family pet dogs and cats, all well cared for and beloved, but requiring a lot of work! The family spent seemingly thousands of joyful times playing card and board games together as a bond to enjoy each other’s company. Betty loved reading novels, having usually a book by her side. Her collection of hundreds of cookbooks inspired her passion for cooking, and she delighted her family with many an expertly prepared meal. Betty reliably corresponded with various people including a group of best college buddies, writing letters throughout her lifetime to this group calling themselves the “Round Robins.” Betty and the family delighted in numerous vacations together. Destinations most precious to her were at the ocean, evocative of childhood memories of the wonderful wide sandy white beaches of Ocean City and Atlantic City in New Jersey. Betty particularly loved trips to Europe. In 1950 with husband Joe, she sailed from New York on the Queen Mary for a six-week tour. In 1972, Betty and family visited France, Switzerland, Italy and Denmark. In 1980 she took a wonderful 24-day Mediterranean cruise booked for Swarthmore alumni through Greece and Greek Islands, and locations in Turkey. Betty and Joe loved their visits to see son Scott in1986 and 1987 in Germany and Belgium, where he worked at the time. Betty lived worthy life, greatly enriching the lives of all those around her.

Betty Hummell Bullen, 94, originally of New Jersey and longtime Pueblo resident, passed away on November 20, 2020 in Pueblo. Her survivors will always cherish the memory of her loving and joyful spirit, kindness, and thoughtful and inspiring... View Obituary & Service Information

The family of Betty Hummell Bullen created this Life Tributes page to make it easy to share your memories.

Send flowers to the Bullen family.