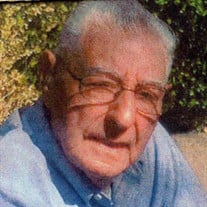 Benerito "Ben" Archuleta, 94 years old, passed away at his home on Sunday, Nov. 26, 2017, with his family by his side. He was born in Wagon Mound, N.M., on Feb. 16, 1923, to Jose E. and Feloniz (Maestas) Archuleta. Ben was preceded in death by his parents; wife, Josefita (Garcia); infant daughter, Theresa; son, Eddie; grandson, Adolph Maes; son-in-law, Ambrose Rodriguez; and nine siblings. Ben, whose identical twin passed away at birth, was from a family of 12 children. He was born at a time of shifting land lines, when New Mexico had just become a U.S. state a decade prior, and with the Great Depression looming. The family thrived, and at times struggled, on the rugged yet idyllic ancestral ranch land. Ben’s mother passed away during his childhood. In 1943, Ben married the love of his life, Josefita (Garcia) Archuleta, also of Wagon Mound. They stayed in Wagon Mound until the birth of their seventh child; their growing family prompting them to leave the ranching life behind for steady employment in Pueblo, Colo. Ben and Josie were married for 45 years and grew their family to a total of 14 children. Ben is survived by his children: Ben Archuleta of Wheat Ridge; George Archuleta of Pueblo; Ernie and Sandy Archuleta of California; Cinda Rodriguez of California; and from Pueblo, Irene Archuleta; Charles and Linda Archuleta; Tobias Archuleta; Arthur Archuleta; Cecilia and Adolf Maes; Joe and Sue Archuleta of Castle Rock; Felipe Archuleta of California; Rosie and Owen Phelps of Pueblo; and sisters, Domie Le Febre of Albuquerque and Josephine Rivale of Las Vegas. He is survived by 29 grandchildren, 40 great-grandchildren, 12 great-great-grandchildren and numerous nieces and nephews. He retired from the CF&I Steel Mill in 1985, after 33 years of service, including at the tube mill and the rail mill. No matter how grueling, Ben never turned away extra shifts at CF&I. He would often arrive home from a long day’s hard work when the phone would ring with the request for his immediate return to the Mill. His work ethic was second to none. Over the decades, Ben spent time making renovations on his home and growing a garden of melons, corn and green chile. He enjoyed taking the family on drives to the mountains and New Mexico, especially to Wagon Mound for Bean Day over Labor Day weekend. In later years, he enjoyed walking at the Pueblo Mall among friends and looked forward to the church festival. He took trips to see his children, grandchildren and siblings living in Denver and California. His children held a family reunion/ birthday party in his honor every Fourth of July for the past 24 years. A special thank you to Betty Villapondo for her caring and support during this past year. Ben Archuleta provided a solid foundation for his family. He taught by example and tenacity, how to overcome hardship and how to live an honest, hard-working life well. A viewing will be held at 5 p.m. on Thursday, Nov. 30, with a rosary to follow at St. Francis Xavier Catholic Church, 611 Logan Ave. The Funeral Mass is at 10 a.m. on Friday, Dec. 1. Final interment to follow at Roselawn Cemetery. Visitors will be received at Ben Archuleta’s family home after services.

The family of Benerito Archuleta created this Life Tributes page to make it easy to share your memories.

Benerito &quot;Ben&quot; Archuleta, 94 years old, passed away at his home...