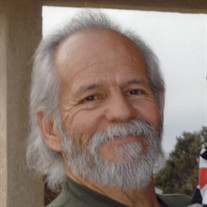 Arthur Gonzales, 65, was called home on Jan 12, 2017. Preceded in death by his dad Eliseo Gonzales, his mom Josephine Gonzales, his brother John Gonzales, his sister Carla Gonzales, his God daughter Crystal Valdez, and father and mother-in-law Albert and Virginia Cruz. Survived by his wife of 43 years, JoAnn Gonzales; children, Tony, Chris (Alex), Tommy (Jennifer), and Sabrina Gonzales; grandkids, Isaac, Aaden, Taalyn, Kiley, Levi, and Andrew; sisters, Thelma (Richard) Gomez, and Clara (John) Armenta, and numerous nieces, nephews, and in-laws. Art was a drywaller for 45 years. He loved his work and took pride in all the things he did. His work was not complete until he was satisfied and could call it “a work of Art.” Hanging drywall was not just a job for Art, it was his passion. He enjoyed teaching others the craft of remodeling and finishing homes. Along with drywall, Art worked as a maintenance man for numerous companies. He was a jack of all trades. He could fix anything involving electricity, plumbing, pools, boilers, cars, and water heaters. Art could fix anything. There was no problem he couldn’t fix and there wasn’t a tool he didn’t have…multiples of. When Art wasn’t working or was on his way to a side job, he would stop at any flea market, yard sale, or thrift store. You could say this was his hobby. Art had a love for tools and he collected them. Art didn’t relax often, but when he did, he had his chair, remote controls, TV, and all his VCRs. Some of the shows he enjoyed were Survivor, Big Brother, any court show, This Old House, or anything on Create. Art was an avid classic car enthusiast. He owned multiple classic cars and went to car shows whenever they were in town. There are just no word, Art was such an amazing husband. He always made sure JoAnn was always taken care of. It was always JoAnn and the kids first. Art would work all the time. That’s just what he loved doing. JoAnn could never convince him to take a day off. He just always had to keep moving. Saturdays were his days for his flea market and pawn shops. Art tried his hardest to always keep everyone happy. Wanted to aim to please, that was his pride. He was a very proud man. Art was strict with his kids, but deep down he was a big softie. He bonded with his kids by teaching them about his passion, drywall. Art always put his kids first. He would work multiple side jobs so that his kids would have what they needed or wanted. Art had a heart of gold. He didn’t want to see anyone go without. He was very generous and would never ask for anything in return. Art had a unique way of showing his love and support. He always had advice to give. Whether it was about fixing things or just life in general, Art would have a solution. We love you and will miss you. Rest in peace, you deserve to. A Funeral Mass will be held 10:30am, Tue, Jan 17, 2017 at St. Francis Xavier Church. At his request cremation will take place.

The family of Arthur Orlando Gonzales created this Life Tributes page to make it easy to share your memories.

Send flowers to the Gonzales family.