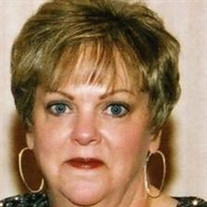 Anita Kay Musso, resident of Ashburn, VA, formerly of Pueblo, CO, went to be with our Lord on July 5, 2018 at the age of 64 years old. Anita was born on January 21, 1954 in La Junta, CO, to Frank E. and Helen J. Hicks. She grew up in Pueblo, CO, and is a 1972 graduate of Pueblo East High School. She worked as a Licensed Psychiatric Technician at Parkview Hospital, where she met her loving husband, John, who also worked at the hospital. Prior to her time at Parkview, Anita worked at Wheatridge State Home and Training, working with infants with Down Syndrome. Anita was an avid bowler with numerous 300 games on her scoresheet. She continued to play in a variety of leagues until her health no longer allowed her to do so. When she could no longer work, she was a career room mother and band mom and embraced all of the students as her own. She loved travelling with the band and chaperoned many trips. She enjoyed travelling with John, daughter, Kristi, and son-in-law Brandon. Even in times of her greatest pain, she saw the most joy in travelling to Las Vegas, Hawaii, and Disney World! John and Anita had just celebrated their 40th wedding anniversary and were looking forward to many more years together. She will be sadly missed by husband, John; daughter, Kristi (Brandon) Smith; mother-in-law, Frances Musso; sisters-in-law, Janice (Eric) Kamen, and Donna (Mike) Hill; along with numerous nieces and nephews and countless numbers of friends. She was preceded in death by her father and mother, Frank E. and Helen J. Hicks; brother, Charles Hicks; and father-in-law, Dominic J. Musso. Family visitation, (no viewing) will be held from 2:00pm to 5:00pm pm. on Thursday, July 12, 2018 at Roselawn Funeral Home Chapel in Pueblo. Mass of the Resurrection will be held at 10:00am, Friday, July 13, 2018 St. Joseph’s Catholic Church Private graveside service to follow. In lieu of food and flowers donations can be made to Paws for Life through the funeral home.

The family of Anita Kay Musso created this Life Tributes page to make it easy to share your memories.

Send flowers to the Musso family.