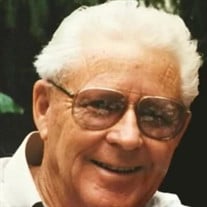 Albert S Godfrey, 97 years old, has gone to live in eternity with his LORD JESUS. On December 6, 2020, he left behind his wife, Eula Mae, three daughters, Kathy (Roger) Samuels, Lynnette (Eric) Goldy, Tammy (Patrick) Fagan, 13 grandchildren, 22 great-grandchildren, and 3 great-great-grandchildren, and many nieces and nephews. He was a native of Florence, South Carolina, and was the last of his 7 siblings. Al worked for CF&I 32 years. He started working in 1950 after graduating from the University of Colorado with a degree in mechanical engineering. At that time no jobs were available in the engineering department, so he went to work as a laborer. He rose to become Assistant to the Superintendent-Rolling Mills, which consisted of 6 mills. He traveled with his job to Germany, Italy, Switzerland, Vancouver BC, and enjoyed vacationing in Hawaii and Arizona with Eula Mae and several places in the United States with his family. He served as a 2nd Lieutenant during World War II as a bombardier in the Army Air Corps on a B29 bomber. He received 3 metals: American Campaign Theater Medal, Victory Medal, and Good Conduct Medal. He had many hobbies such as building bird houses, painting, macramé, stained glass, silver smithing, wood working, fishing, camping, and boating with his wife Eula Mae. He would hook the fish and it was her job to net the fish. He took his last fishing trip with his four grandsons in May of 2019. He also enjoyed hunting, which he did in his younger years. But his family was the most important thing in his life except for his love for his Lord Jesus. He always said, “There is nothing you can’t do, you just have to get started.” He was a member of the Gideons International and also worked with the Junior Achievement in the 1950’s. He enjoyed giving out Bibles at the schools. He was a member of the Pueblo Christian Center and he and his wife Eula Mae had 75 years of marriage together. He was a good husband, dad, granddad, great-granddad, and great-great-granddad, and will be missed. A private graveside ceremony will be held, and a memorial service will be held at Pueblo Christian Center at a later date. In lieu of flowers, Al requested donations may be made to the Gideon’s International in his name.

The family of Albert Stephen Godfrey created this Life Tributes page to make it easy to share your memories.

Send flowers to the Godfrey family.