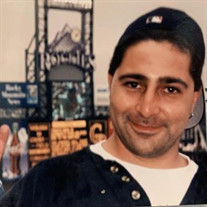 Alan “Al Dogs” Olmstead, 55, a lifelong Puebloan and proud bulldog passed into eternal life on December 20, 2021. He was born on March 24, 1966, to Walter and Ramona Olmstead. Al is survived by his daughter Jaelen, mother Ramona, sisters Judy Olmstead, Selena Jaramillo, Kathy (Ron) Garcia, and brother Gary Olmstead, as well as numerous nieces, nephews, and friends including his former wife and friend Jennifer Chavez. He is preceded in death by his father Walter, sister Nancy Rivera, brothers in law Leonard Rivera and Frank Jaramillo and niece Teddi Cruz. Al grew up on the "lower" and graduated from Centennial High School in 1984. He lettered in football and was proud to give his jacket to his daughter, even though she would have her own Central High letter jacket. Al cherished his neighborhood friends and always had a nickname for them. He loved sharing his stories of playing softball and football with Danny, Greg, Paul, Andrew, and the other lower Eastsiders. Al went on to attend the University of Southern Colorado and Pueblo Community College where he obtained his welding certificate. He worked as a warehouse worker but his passion was landscaping. One of his proudest jobs was landscaping the Broadmoor World Arena. He could often be found at the race track betting (and losing) on his favorite jockey Cory Nakatani. He was a fan of NASCAR and would often drag his family to watch it but the INDY 500 was second to none. He was relieved when Jaelen was born a day early allowing him not to miss the race. This was his personality always joking but knew what his priority was, being there for the birth of his daughter. Al looked forward to the annual family camping trips to Monument Lake, where he, Gary, Frank, Leonard, Big Ron, Ronnie, Frankie, Jimmy, and Anthony shared cold ones while fishing, telling jokes, and stories at the campfire. They all considered themselves expert fishermen until 5-year-old Jaelen shut them out with her Barbi fishing pole. He loved music but 80s hair bands ruled. We all know he was the best air drummer ever! He was generous, kind-hearted, and had the best sense of humor. He will be best remembered for his quick wit, his love for his daughter, and his four-legged son Prince Eugan One last Al joke (a PG one), What did the buffalo say to his son when he left for college? Bison. Bye for now Al, you will forever be in our hearts. Funeral Mass Tuesday, January 4, 2022, 9:30 am St Joseph Church 1145 S Aspen, Pueblo CO 81006.

The family of Alan "Al Dogs" Olmstead created this Life Tributes page to make it easy to share your memories.

Send flowers to the Olmstead family.